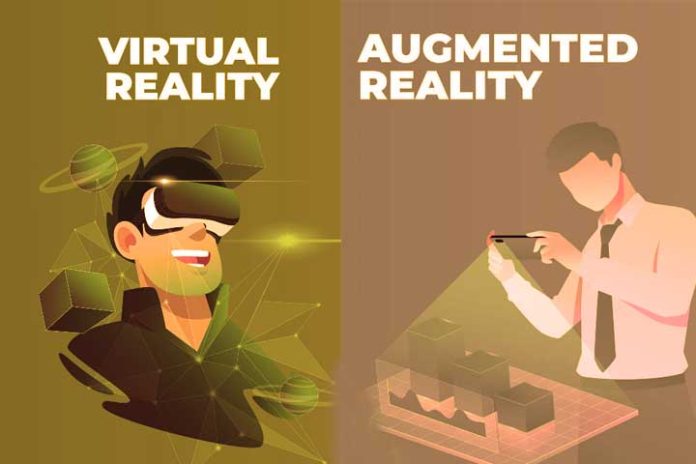 Despite the efforts of Facebook and other technology companies to get the Metaverse going, it has not quite started with the necessary force.

The technologies and infrastructures necessary for its proper functioning may still need to be sufficiently developed.

It will probably take a while for the Metaverse to become what it is supposed to be.

You can check our blog post dedicated to the Metaverse for more details.

Two technologies associated with the Metaverse concept are Virtual Reality(VR) and Augmented Reality(AR).

We will explain what each consists of and the main differences between both technologies.

Virtual Reality is based on creating a wholly digital environment in which the user’s immersion is total.

We are completely immersed in this virtual world and isolate ourselves from Reality to carry out different activities.

To complete the degree of immersion, we will need devices such as helmets or glasses, headphones, and gloves that allow us to interact with the environment.

As technology advances, the worlds created will become more and more realistic, and it will be more difficult to distinguish the real world from the virtual one.

The uses that can be given to it are innumerable, and over time new ways of taking advantage of this technology will be developed.

It is in video games that it is used the most since it allows us to immerse ourselves in the world of games fully.

We will believe that we are in the middle of a battlefield, in a gloomy mansion inhabited by ghosts, or playing a soccer match as if we were the centre forward.

Other areas with very interesting uses are education, medicine, architecture, and to simulate emergencies.

Imagine being in a reenactment of Ancient Rome during a history class or performing a rescue in a simulated natural disaster.

Augmented Reality consists of a combination of the real world with the virtual world.

It is about complementing the real world with objects or digital indications that provide more information about certain aspects.

Through glasses, our mobile phones, or other devices, we will see the real world but expand with digital objects or data that are not there.

Through a series of examples, we will better understand what it consists of and its possible applications.

In a museum looking at a painting, we can see information about the author or the time it was painted in real-time.

When we want to change the decoration of our house, through this technology, we can see how the furniture would look before putting it on.

The Pokemon Go video game allowed us to see and capture the characters in the real world through our mobile.

Main differences between VR and AR

While Virtual Reality involves the creation of a completely virtual world, in Augmented Reality, we interact in the real world but with digital elements.

Closely related to the previous point, user immersion is much higher in VR than in AR.

The devices needed to use VR technology are more expensive than those for AR.

That makes AR accessible to a more significant number of people.

These technologies open up a new world of possibilities and can have multiple applications for all types of companies.

Both can coexist and are complementary. The combination of both gives rise to the so-called Mixed Reality.

As the costs and technical requirements are lower, more and more people will be able to access these technologies, and new uses and applications will be devised.

Technological advances will also determine their future and the moment they become (or not) technologies for massive and daily use.