HomeAPPSGoogle Chrome Vs Microsoft Edge: Which Is Better Of The Two?

Google Chrome Vs Microsoft Edge: Which Is Better Of The Two? 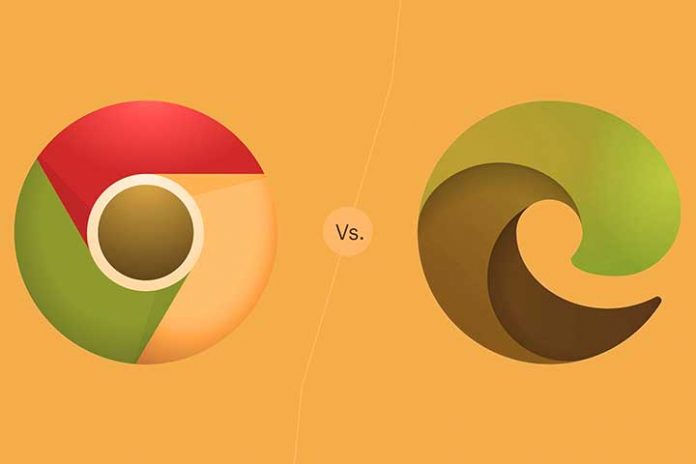 Everyone knows about the need to use a browser on the computer. Everyone has the one they consider best, or simply the one they have installed on their machine permanently. But from time to time, it is good to change scenery, especially with all the modifications that companies make to improve their software. And this is where we are going to focus today on which is better of the two browsers between Google Chrome vs. Microsoft Edge.

It is difficult to read this statement since it is clear that facing Google Chrome vs. Microsoft Edge is very simple at first glance and the stroke of memory.

But we can not use visual details to make a fair and correct comparison between the two browsers.

Other factors must be considered, such as their programming bases and compatibilities that can significantly differ in their usefulness, efficiency, and productivity.

Let’s look at those improvements that Redmond and Mountain View put in their programs so that users feel more comfortable using them.

Features of each browser

We will see different sections, but you must bear in mind that, in the end, the end-user is you, and whoever wins (if there is a clear winner), it is you who chooses that piece of software with which to enter the world of the World Wide Web.

Before we start, we have to keep in mind one thing: we are talking about the newest version of Edge. And it has nothing to do with the first version that arrived in Windows 10, which is why we face the two browsers in addition to certain things that we are going to tell you next.

This is the first point we will compare from Google Chrome vs. Microsoft Edge. The first thing you see is the design of both, and the truth is that they are very similar aesthetically.

The distribution of the address bar occupies the top with a tiny keypad on the right side. The tabs have bevelled edges in both cases, but they are indeed more marked in the case of Chrome.

This has a reason, which is none other than to have the same basis. Both Google Chrome and Edge are based on Chromium, open-source software that feels like the basics to start working on both platforms.

This is an important part for users. And it is not a matter of you going to open a lot of tabs at once, but that the browser has a superior speed is very important and that, in addition, it does not slow down the machine.

Here we have a problem in the case of Chrome, where it can take up to 1.4 GB of memory with just a few tabs. In the case of Edge, with the use of a few tabs, it barely reaches 665 MB. Therefore, Edge can help you save computer resources that you later have to use in other programs.

Here we have to look at some of the essential points a browser has to measure up.

For example, it is true that if you use google’s browser, you will have better integration with its office tools and cloud services with its shortcuts.

Not to mention that it has a broader extension store, something you should not abuse if you do not want the browser to consume more.

But the latter also has Edge, with the same recommendation, to which we must add some extra important features.

These are accessibility, where we must highlight the use of a narrator aloud (which inherits from the operating system) and protection.

And while many browsers worry only about the improper use of cookies, it adds a plus avoiding malicious downloads and any other type of malware in Edge.

As you can see, after comparing Google Chrome vs. Microsoft Edge, there seems to be a clear winner. And despite having the same base, the Redmond company has found the key to creating an exciting device for users.

Good performance and many practical capabilities are the banners of Edge, which seems that they can return you to the Olympus of Internet browsers.

Also Read: How Opera Stands Out From Other Web Browsers