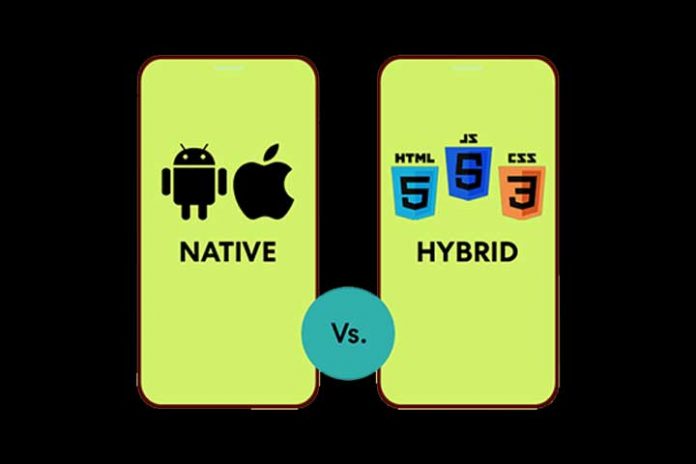 Given the rise of mobile applications, we may have once thought as programmers to develop an application of this type. Beyond having a great idea that will help us invent the new WhatsApp when considering its development, bringing our concept to fruition comes to mind. It is also possible that it is a company that has hired us to develop it, and the only thing we have are the specifications that the project must meet. Either way, we find ourselves before us with a conceptual proposal that we must finally transform into a mobile application.

Once we start analyzing the project and designing it, we have to address a crucial decision that will mark the development of the application: should we develop a hybrid or native app? To answer the question, there are a series of factors that we must take into account, such as the time we have for development, the budget that will cover the project, the training that the team that will program the application as if it is not us alone and the final result that we want to obtain both in terms of user interface and Performance, the latter point closely linked to our final decision.

There are several issues to consider when considering the development of mobile applications, whether hybrid or native. The first determining factor is the destination platform or platforms of our application. Suppose we want our application to be available for Android, iOS, or both since today it does not make sense to consider other options due to market share. At first, we might all think that it is normal to develop for both platforms, but on many occasions, when we create at a business level, the target audience will use a specific type of device.

Let us think, for example, of applications for the control of fleets of delivery men, in applications for waiters in a restaurant, or applications for commercials of a particular company. In these cases, as in many others, the application will probably be installed on devices that the company itself will distribute, and that will all be of the same type, ordinarily mid-low-end Android, so perhaps considering hybrid development would not make as much sense as when someone wants to do cross-platform development. That said, we are now going to focus on those developments where we want to implement a solution for both Android and iOS since this is the point at which evaluating between a hybrid or native solution makes sense.

There are several issues to consider when considering the development of mobile applications, whether hybrid or native.

As a fundamental idea, we must think that the main difference between both types of solutions will reside in the number of applications we must implement. In the case of hybrid mobile applications there will be only one since the core of the program will be developed with languages ​​of a web nature (essentially HTML5 and CSS). In contrast, if we want native applications, we will have to create an application for Android, in Java or Kotlin language, and another for iOS devices, in Swift or Objective-C language. If the decision were only between developing a single application or two to obtain a solution to our project, it seems apparent that we would all opt for the first option. We will see that not everything is as simple as it looks when we see the characteristics of both types.

When developing a native application, we have a series of characteristics that surpass its hybrid alternative and that we must take into account:

The fundamental would be the best use of the sensors and functions integrated into the devices. Aspects such as camera, presence, movement, light sensors, GPS, or positioning are some facets where a native application improves on a hybrid solution. Although more and more, in hybrid mobile applications, we have libraries for managing sensors, we often depend on third-party libraries that have to be maintained, which adds one more concern to the project. In native mobile applications, there is no such dependency as the libraries come integrated with the system, and Google and Apple are in charge of setting the trend and implementing it, with the consequent time lag until the native solution adopts them.

Performance is higher in native mobile applications. This is because there is no “conversion” phase to native code. They work with the platform’s user interface, and the use of these components makes them faster than those used in web technologies. Although it is true that in applications where a very high speed is not required and that the devices are better every day, it is a factor to consider if we need extreme fluidity when it comes to seeing our application in operation.

The platform’s security is more significant in native mobile applications since they provide libraries to implement the new security layers that applications bring out with each version, such as individual acceptance of permissions or that occurs at the time of use.

Let us now analyze the advantages that we can obtain with a hybrid solution:

A single code. This is the true “core” of this solution. We will have a single development, so the effort and time to obtain the final result will be faster. We can also have a single application to maintain and evolve. This, which is easy to say, is often the most crucial decision-making factor.

The development team only needs to know one technology. It is also related to web languages ​​(HTML, CSS, and JavaScript), so finding staff to carry out a project is relatively more straightforward than finding Swift or Kotlin programmers.

What decision to make?

At this point, we have seen that the answer to this question can perfectly well be “it depends.” Suppose we want a very fluid app, based mainly on sensors and with a very high level of security, or we are considering developing a game with 3D animation. In that case, the native solution should be our choice. If this is not the case, we must seriously believe that the hybrid solution may be the answer we need, even more so if we can easily extend the said solution to a web page. We should not think that our work ends in the implemented mobile solution since this could be considered only the front-end of our project. Still, other aspects, such as the back-end of the database, must be assessed simultaneously—time to develop the complete project.